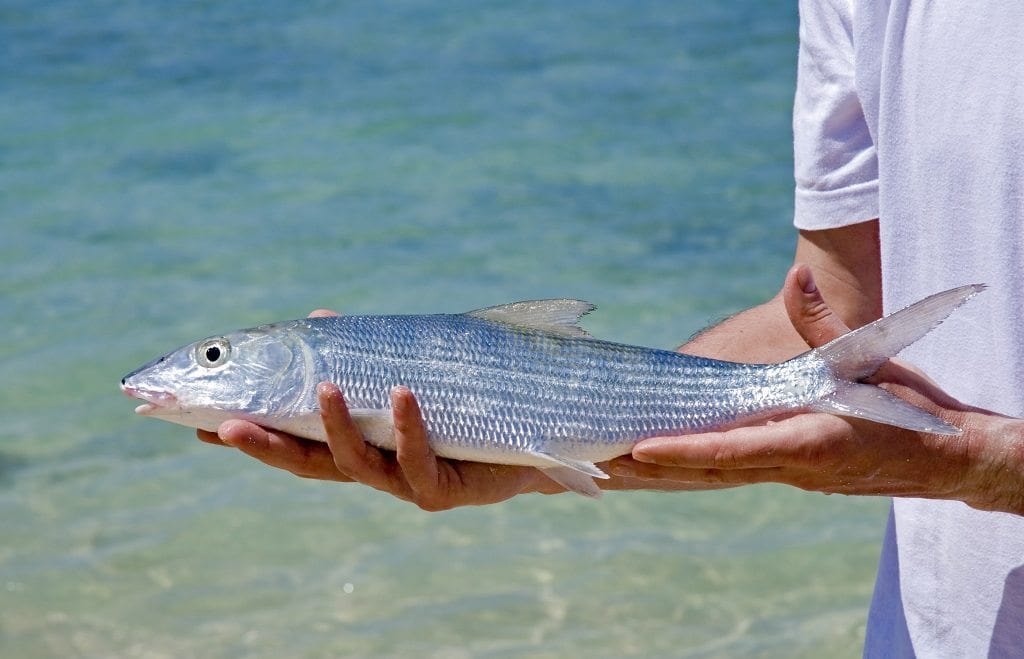 The bonefish is arguably one that was made for the sport of catch and release fishing. It developed a reputation for the Florida Keys and the Key West as one of the most famous spots for sport fishing in the world. This fish has earned the title of the ‘Ghost’ of the flats. The bonefish has mirror like sides, weary eyes and excellent senses which can rival those of any predator fish. The bonefish has a long standing reputation as one of the best sport fishing species around.

Bonefish are in the Key West area all through the year. The massive flow provided by the Atlantic Ocean to the south and towards the Gulf of Mexico, the waters in the Key West area and Florida, are exactly the right kind of temperature for the bonefish to thrive and exist in plentiful numbers in the region.
During the spring months, the waters start becoming warmer as the months of April and May approach. During this time, the bonefish come up to the flats to forage on shrimp and other species of bait. The peak season however is in the late summer through the fall until the first cold front arrives in the month of November.

Bonefishing in the Flats

The sight fishing for bonefish is truly an unforgettable experience. Go along with expert flats fishing guides on their flats fishing boats out into the shallow waters in search of this ghost of a fish. This game fish is not very easy to catch. You should use fly fishing or spin the fishing gear with ultra light lines. For live baits, you should make use of shrimps and small crabs. They are a particular favorite for the bonefish. When you are fly fishing, try to use the kind of fly which is designed to imitate small crustaceans like crabs and shrimps.
Bonefish are wary of any movement on the flats. They are also quite agile and fast. It is important to know exactly where you should cast and present the bait or fly to increase your chances of luring them in. Once you finally get one to bite and get hooked on the fishing line, you will understand exactly what all the fuss surrounding the bonefish is about.

Traditionally, Bonefishing is done from poling flats fishing skiffs, which allow guides to be able to get the anglers into shallow waters to have a chance of catching the bonefish. The thing with these flats fishing boats is that they can only carry two people. When the angler is spin fishing from the flats fishing skiff, both anglers can participate in casting baits and fishing at the same time. For fly fishing, one angler has to wait for their turn once the other angler has cast their baits out into the shallows.

Not so Traditional Flats Fishing Boats

The unconventional boats for fishing in the flats are the bay boats. By making use of the trolling motors, access to the shallow waters is obtained. Flats fishing guides coming along with you on these expeditions make for an effective flats fishing trip. These boats can be used for fly and spin fishing by 3 people at a time in the flats.